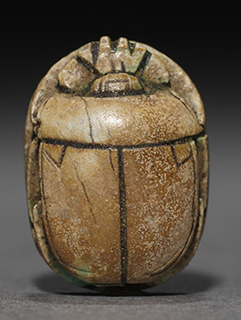 Amulets and talismans are objects with magical powers ascribed to them. According to beliefs they bestowed on their owners happiness and wellbeing, protected them from losses and misfortune. Endowing an object with magical powers has its roots in human fears and prejudice. Amulets and talismans were widespread since ancient times within almost all nations of the ancient world, such as Egyptians, Babylonians, Assyrians, Samaritans, Copts, Etopheans, Phoenicians, Jews, Arabs, Persians, Chinese, etc.

First examples of amulets were found in Egypt, that were made in a form of scarab - sacred beetle of ancient Egypt. Under local beliefs owners of such amulets were granted immortality in view of the link of scarab to Khepri - the god of the rising sun in ancient Egypt. Egyptian amulets, made of various types of stones and glazed clay, had inscriptions on their inner side primarily from the “Book of the Dead”. During the mummification process, such amulets were deposited in the place of a heart (see [1]).

Written forms of amulets (Armenian prayer scrolls, phylacteries, hmayils) originated after the invention of writing. For centuries prayers and curses were passed on orally by mages from generation to generation. Even long after the writing was introduced, a word of mouth passage of prayers and curses was preserved. With time, however, mages had come to realize that written symbols bring longevity to prayers or curses. This motivated the birth of written forms of amulets (hmayils) (see [2]).

In the Armenian culture along with various forms of talismans, there are collections of hmayils of written prayers and curses often decorated by illustrations. These were created following scroll (tape) form - one of the archaic shapes of manuscripts. A scroll (or a coil) has its roots in the experiments of the ancient mages: it was a common belief that a prayer or a curse in a scrolled form would be protected against external unfavourable influences by so gaining a large power.

The word Hmayil originates from Pahlavi (middle Persian) “humav” meaning blessed. Writers also refer to collections of magic words as “Hmayil”, “Hamayil”, “Cyprian” or “Cprian”. Cyprian was the name of those Hmayils which contained the story of religious conversion of Bishop Cyprian.

A peculiar interpretation of the word “Hmayil” is presented in colophon N 424 of The Matenadaran, where it reads: “I wrote this sacred preservation book that is called “Hemayel”, which is an irrelevant name. Out of ignorance, they call it “Hemayel”, as it is a sorcerer who spells "Hem" and the writing they create is called “Hemayel”, meaning written or composed by Hem. My writing is not like that, it is pure and free of any sort of wizardry. It contains wishes and prayers of our saint and blessed priests, the likes of saint Grigor of Narek as well as saint Nerses of Kyalets, relying on who we created this preservation script for persecuting demons and curing all the illnesses”.

Hmayils, in general, are written in one column. Some examples have a section written from right to left and left to right in slanted-intersected rows. Usually, this form is used to represent two prayers intersecting by rows. All forms of Armenian handwriting are present in hmayils, namely erkat‘agir (used rarely), bolorgir, notrgir and šłagir. A small number of samples of hmayils have writings in erkat‘agir script along their margins: one of the oldest hmayils, printed in 1698 follows this pattern. In general, only one face of hmayils is used for writing, however, there are examples with their second face also employed both for writing prayers as well as including illustrations.

The average length of handwritten hmayils is estimated to be 5-7 meters. There are around 30 hmayils that are more than 10 meters long. The longest known Hmayil is 27.73 meters long and is stored in the French national library. As far as the length is concerned the hmayils of New Julfa have a unique place, their length oscillates between 89 - 169 centimetres.

The largest depository of hmayils is The Matenadaran after Mesrop Mashtots (559 items). This collection contains the oldest dated hmayil, created in 1428 in Mufarghin (in Diyarbakır province, a city (formerly Tigranakert) in Arzanene (Ałjnikʿ) region (ashkharh) of the Greater Armenia (Mets Hayk) ) by scribe Simeon (N 116). The second-largest collection, which contains 57 scroll-shaped hmayils, is at the Holy Saviour's monastery of New Julfa. The third-largest is at the Etchmiadzin Cathedral containing around 50 items. There are samples of hmayils at various libraries and museums, namely at Venice’s Armenian Mekhitarist Congregation, British Library in London, National Library in Paris, etc., as well as in private collections.

Scroll-shape hmayils similar to other handwritten Armenian books are decorated by illustrations. The miniaturists were mostly beginners or representatives of folk art, however, there exist illustrations in hmayils created by master artists as well.

A significant role in the art decoration of hmayils is dedicated to images of saints (God the Father, Jesus Christ, Grigor of Narek, Nerses the Gracious, apostles, etc), where a distinct group is formed by images of horse rider saints or saints with protective function (Saint Sargis, Saint Georg, Saint Theodore, scenes depicting medicine, restraining of demons, etc. ).

Miniature decorations of hmayils are perceived by their clarity, reminiscent of traditional forms of Armenian fine art folk culture. This is based on the fact that creators of hmayils, mainly being priests as the colophons of manuscripts testify, were free of strict restrictions which the religion may impose. Thanks to their creative freedom a unique world of folk culture had come to existence.

To navigate on the image or for viewing it in full-screen mode use the control panel on the top left corner.

The photo of scarab is reproduced from The Cleveland Museum of Art under Creative Commons license. The image on the bottom of the screen is Hmayil N 521 of The Matenadaran, whose current version as well as the tumbnail image of this article were reproduced from Davit Ghazaryan's collection (photogrpaher Hrayr Khacherean) with his permission.

Original article in Armenian by Davit Ghazaryan - Ph.D. in Arts, senior researcher at the Matenadaran